Rebel With a Cause

Alicia spent most of her formative years rebelling against everything she thought her mother stood for and to a lesser degree her dad as they were rarely ever home and she resented that. She grew to resent Battlemechs yet the Iron Dingoes are family and one she would never intentionally abandon.

Eventually she went to a military school, an attempt by her parents to discipline her. Oddly it settled her and she grew to love the discipline especially of physical training. After which she applied to the War College but went the route of Infantry, in part it was a middle finger to Mom. Nonetheless she continued to prove her grit and focus and eventually accepted a billet for training in Battle Suits.

Then Mom died. Many things have been said about her death and suddenly Alicia found herself adrift with no place for her anger having made her peace awhile ago with dad. As she graduated, Alicia found herself on a new path to redefine who she is without the frame work of what her mother was.

She new what she was capable of but now she was on a new Road to find herself. And she had been placed with others to go out and prove they were worth the Legacy that they could eventually inherit…

“I hated you and dad for never being here.

“I hated your strict rules even more because you were not here.

“I hated your do as I say not as we do commandments given the lifestyle you and dad kept. The partying, the drinking, the whoring – or at least so goes the gossip but given the way you lived …

“I hated not seeing you. I hated seeing you. You were a stranger. At least dad retired and gave some of his time to us. To me.

“I hated your vanity. Your need to be a girly-girl which you insisted I be as a child.

“I hated how you acted superior and looked down on the infantry.

“My hatred of and for you shaped the path I took out of spite. But I do not regret it.

“We fought. We screamed. We broke things. I was not like you. I never could be. Your expectations were not my own and never would be.

“And now as I look down upon your grave I hate that I cannot take it all back. I cannot say I am sorry. I will never get a chance to know you and you to know me. That our war as mother and daughter shall never know peace. How can it? For once again, you left … just like every other time, leaving us with the nanny and dad though he was busy with his things. Except this time, you never came home … you died leaving only a shell…an empty fucking shell!”

- Said over the headstone of Major Erika Hartmann by her daughter Alicia Rita De Luca after graduating from the War College in early 3047. 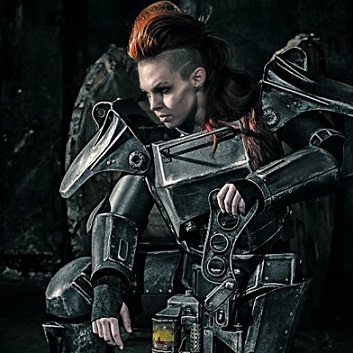