Head of Operations for the Emerald Road

Station Master Desna Greer has a stocky, unfeminine demeanor. She is a Veteran NPC Administrator, and a Regular NPC Belt Miner.

Desna is, like most Belters, blunt and forthright. She is not, unlike Station Master Haro Lothrain, quick to anger, but she says what she thinks and makes no effort to hide her displeasure over something running contrary to her plans or wishes. This makes her intimidating to work with, especially for those used to corporate life, but her competence and attention to detail is never in question and she is precisely the person one would want responsible for the operation.

Desna was, like Haro, an Excalibur Corporation prospector of noted success. Very much a maverick, she was noted for impetuosity which was, fortunately, tamed after she found herself in difficulties whilst surveying an asteroid believed to have a healthy lode of radioactives. The accident left her scarred down the entire left side of her body, but the injury served as a sobering influence and Desna became an operations director within Excalibur noted for her uncanny ability to bring mining projects on-line and below budget without compromising either safety or efficiency.

Desna joined * “The Iron Dingoes” shortly after Governor Jenna Marcuros recruitment, seeking an opportunity to return to direct operations management that contained the kind of edge she had enjoyed in her earlier years. Her talents are being fully exploited by Haro and she is now responsible for all logistical co-ordination of the station’s contracts and operations. As a hands-on manager she ensures she surrounds herself with the best staff for any given task, and is responsible for all hiring within the station.

The opportunity of the station was music to her ears; the challenge of recommissioning the ancient mining rig, and placing it under her aegis, was precisely her forte, and as the closing of the deal neared, her excitement at getting the project underway was visibly palpable.

She continued serving as the CFO of the Factory for many years, and built many of the relationships with the citizen-miners of The Trojan Dominion of Cortez who visited the station, that remain to this day.

In late-3048, she was given the opportunity to take over the small trade station at System – Kaaniir, “The Emerald Road”, and readily accepted. She moved there with her small family, and quickly took control of the facility, shaping it into a viable trade port for * Iron Dingoes Autonomous District (IDAD)’s expanding influence. Having much in common with the various factions on the planet, her control was easy and she readily found her place in the system. 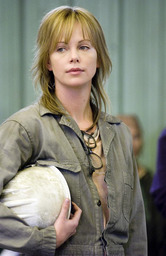