Or, Home is Where the War Is 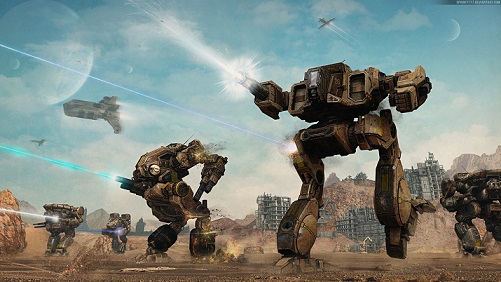 Home is Where the War Is : On November 7th, 3023, the unit began Contract – Operation : “Where the Wild Things Are”, while they sent off the Blood Raiders to take their own first “shake-down” mission, with Contract – Operation : “Shake-Down”. The Line contract took them through System – Gollere with a short stop to inform their ally Baron Jemmas about the wedding of his daughter, and make him an offer to produce the Sonic Blade and LIF-CK “LIFer” Micro-Fusion Battery Pack for a cut of the profits. His agreement was the eventual catalyst for the foundation of Horn Industries. After a quick recruitment of some local talent, they continued on towards System – Great Gorge, where they reported in and received their orders; to hunt down a recent band of pirates who had reaided the local industrial facilities, believed to be based from System – Drellesarr. The unit jumped out-system on their trail.

The unit made landfall at Merim City on January 23rd, 3024, after a series of jumps deep into Systems Constellation – “The Hyades March”. The city’s status as something of a black market port gave them the opportunity to purchase a couple second-hand Mechs, and they found rumors of the pirate’s base of operations deep in the planet’s wastes. The unit raided their fort, managing to defeat the pirate force and sacking their base of operations. They discovered that the unit were actually an auxiliary force of Indro the Lightless, a powerful pirate lord in the region, who used their facility as a resupply base from time to time. Indro apparently knew about the Iron Dingoes, though his information was a little out-of-date as to the exact leadership and make-up of the unit, and had offered a bounty on their leadership. Returning to Great Gorge, the unit reported in their success in destroying the pirates, and completed their contract, though prize court deliberations would take some weeks to complete. After a month of downtime on the planet, they got a fair bounty in hard H-Bills and time to rebuild and refit their machines.

Meanwhile, Moxie had continued on towards System – Tharrill, conducting some hard science regarding his own research into AIs and also investigating the local “Red Plague”. Meeting with the local specialist in the topic, Doctor Elsa Kast, they investigated the plague from its orbital habitat, and studied all the available data on the subject, gaining access to the system’s extensive records and studies on the matter, and also impressing Doctor Kast with a mercenary unit’s willingness to engage in simple, hard science without any offer of military gain. They secured her support as a local contact for a healthy bursary for her research.

The main Line of the unit rejoined Moxie in June of 3024, and then returned back through the constellation to return to System – Gollere long enough to meet with their ally. They learned of the recent increasing demands in resource quotas among the resource colonies to support the central governing body, the Mangai, and the political reasonings behind his recent marriage of his daughter to the future of the Iron Dingoes giving him some freedom from those restrictions. The unit also secretly investigated the ruins where they had left REAPER, discovering he had abandoned the facility, though they didn’t know where he might have gone… They also returned to the SAMURAI ruins and after ensuring future recruitment options from Baron Jemmas’ college were possible, left the system and returned to Dumassas.

Making landfall at * Landhold : Garrison on July 22, 3024, they found the local district engaged in political fever. Of note, they discovered that The Trojan Dominion of Cortez had recently come into the system’s limelight, offering their cheap products on the system’s markets, and the unit engaged Captain Vesna Clamp to make contact with the belters. The unit also began an expedition to find and recover whatever they could from the local moon’s Sarang Helium-3 Processing Plant. The unit ensured that all members of the unit’s landholds were free to vote however they wished, with the unit openly backing no single candidate. Election day arrived, and Governor Albertina Diego won with a landslide victory. As the celebrations began, in distant The District of San Andrés, Providencia and Santa Catalina a new die was cast.

Or, Home is Where the War Is