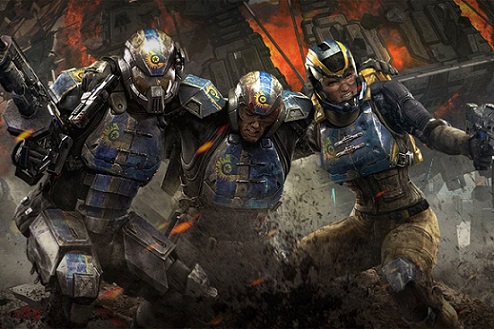 The sudden invasion in early-3031 of The Petrópolis Free State by the 7th Cavalry – “The Iron Ponies” and that nation’s subsequent declaration of independence under the Bloody Hand of Marcosa, set the various warlords of the Marcosan Mandate into an emergency session. While the blast zone of the capital and the irradiated regions north of that ruin provide a fair buffer region against this nation-state, Federale City had nonetheless begun executing patrols along the border, unsure of the intentions of this nascent nation-state, particularly given their dislike of the rest of Marcosa.

By mid-3031, the region came under a period of consolidation, as various warlords in the supporting colonies began to vie for control. The two primary regions, The Province of Cabinda and The Province of Central Marcos rose to the challenge, and became provinces under the Marcosan Mandate, sitting as senior members. While a handful of small warlords still existed, their power and influence were miniscule compared to these regional governments.

The rise of The Commonwealth of Nations and its associated trade organization, the TTA, led to a sudden backlash among Marcosan membership. Largely stemming from the influence of large numbers of pro-Marcosan refugees fleeing the devastation of Petrópolis, and a growing political influence of the Bloody Hand of Marcosa, the nation-state condemned both organizations as “…pandering to international markets and cultures…”.

While many pointed-out its local support of Consolidated Foods Limited (CFL), the nation-state nonetheless rattled its sabers and conducted “scouting missions” against border villages of The Petrópolis Free State, but was largely rebuffed by both the local 7th Cavalry – “The Iron Ponies” patrols, and the recently deployed 2nd Star Guards (San Isabel) of The Commonwealth Star Guards. By 3027, these border raids had begun to push migration away from the border regions with San Marcos, towards the capital of New Jericho City.

In late-3039, amidst rumors of the demise of much of the Iron Dignoes leadership in the War of 3039 along the Draconis Front, the Bloody Hand began another round of nuclear strikes and general mayhem against their close enemies, the 7th Cavalry – “The Iron Ponies”, and the land they have been chosen to call their own. Three days later, a shuttle on a suicide run shattered The Traveller with a nuclear blast at the Zenith Jump-Point, and cemented their enmity against the 7th Cavalry. These acts began a resurgence of attacks against the borders of The Petrópolis Free State, and led to the global War of 3040.

The world rallied under the flag of the Commonwealth against Marcosan forces, and the sudden appearance of the Sword of the Monarch brought the war to a sudden and final end, with many of the newest militia forces surrendering in the face of the artifact. Federale City itself was occupied by forces from The Commonwealth of Nations, and its surrounding territory quickly fell into step with the post-3040 Unification War treaties. It remains occupied by Commonwealth forces today. The supporting nation-states of The Province of Cabinda and The Province of Central Marcos were also occupied by the 7th Cavalry – “The Iron Ponies” and * Iron Dingoes Autonomous District (IDAD) forces following the conflict, with the former retaining control of the realm, and the latter establishing a puppet-state that is economically backed by Dingoes financial and military interests to this day.