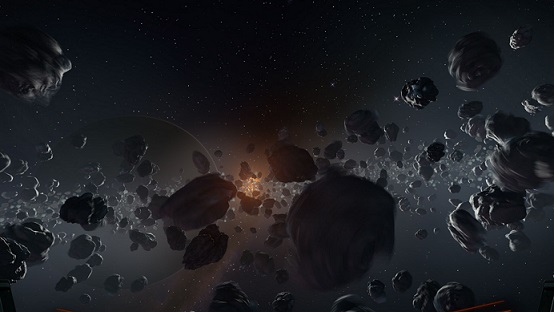 Davion Outback : Returning to System – Dumassas and the bulk of their forces, the unit placed their new station, “The Factory” in the Zentih jump-point, and arranged for several contracts to keep their unit afloat. Following up on rumors and their own investigations, they traveled into System – Malagrotta, researching and investigating the rumors of the “Malagrotta Affair”, eventually searching out the L-4 site of the battle, and uncovering the wreckage of the battle, and the battered remnants of the ancient Jumbo-Class DropShip “Tentative” being used as a pirate’s base. The unit wiped-out the pirates, salvaging much of the pirate’s goods and support vessels, and traveled to uncover the truth about the pirate station known as Tequila Beach.

Visiting the site, and discovering the hidden black market station, they traded much of their ill-gotten booty, and continued to follow-up on the mysterious Jumpkeys they had recovered. They procured information regarding the Keys possible jump locations, and trying the one they identified as being nearby, discovered System – Rolling Thunder. The unit investigated the hidden pirate refueling station, and after a quick battle, captured it and forced the surrender of the resident pirate band. With most of the fleet jumping back to Dumassas, the unit used “The Freedom of the Stars” to destroy the station and many of its untrustworthy personnel and pirates.

Returning back to Dumassas, the unit took a short-term pirate-hunting contract from Baron Jemmas of Horn, dealing with a mysterious force of “…golden-armored soldiers…” known simply as the Legion of Gold, that had been increasingly raiding his northern lands. The unit investigated the region, finding many ancient sites that had suffered a fairly intensive orbital bombardment in the past, and using an ancient map in the Baron’s possession, searched many of them. Eventually concentrating on the north-western swamps, they encountered an armored bunker that was defended by a large force of STN-3L Sentinels and the mysterious, golden-armored Battle Armor – Tornado PAs. As the battle joined, a lone Lion-Class DropShip was noted as reaching into high orbit above the site. The fight was quick, but brutal. Eventually the unit sent a handful of marines into the bunker, while techs salvaged the field, and the Dingoes Council joined them, finding miles of corridors and a once-vast underground facility.

As they investigated, they encountered cybernetic-controlled people, many of whom were wearing the golden armor, as well as a strange control creature calling itself Content Not Found: reaper. An augmented human brain designed as a long-term storage device, REAPER had been manipulating the resources under its control to build a defensive army, and had since expanded its aims to take over the planet from the “mouth-breathers”. Once the unit had secured the base, and proven their position, they bargained with it for the information REAPER protected. It agreed to give them access to the secrets behind the golden armor, if they gave it back access to the central defensive controls, and power to its ECM Field. Recognizing they would lose it all, they agreed, and taking the civilian prisoners and much of the equipment they found in the workshops with them, they lifted-off, and chose to report in their success. They also identified their prisoner “Seraphim” as being one of their old enemy Lord-Marshal “White Death”’s daughters.

Taking their opportunity to investigate one of the other ruins they had identified on the map, they searched the “SAMURAI” site, finding it to be a “rival” site of REAPER, that was engaged in biological research efforts, and after defeating another band of cybernetic “clones”, the unit salvaged the site of everything they could carry, and returned to Baron Jemmas, formally meeting with his family, and receiving their reward in trade certificates and hard resources. The unit then lifted-off and reporting to REAPER, they were jumping out-system, received a snap-burst communique that included the Battle Armor – BH-18 “Waddle” Combat Walker REAPER had promised. The unit jumped back to Dumassas, only to discover the world was undergoing a very fundamental shift.