The House of Cards 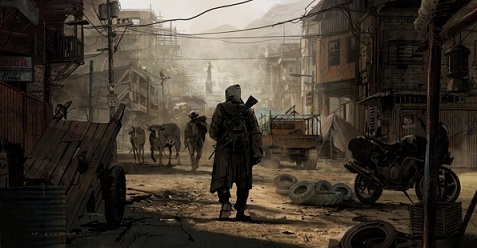 The House of Cards : The unit returned to System – Dumassas, landing at Garrison on November 5th, to find another wave of the virulent Outworld Flu had struck the planet, causing widespread difficulties and death all around the planet. Closer investigation of the disease revealed that it might have been an attempt by scientists in San Marcos or Tragnar to specifically target the Iron Dingoes and their allies, but that the disease had been genetically created and weaponized, before getting loose into the world. The deaths among the unit’s recruited green battalion from San Marcos seemed to be the origin of the disease among its own allies, and reinforced this theory.

Also, the national governments of both San Isabel and Sangria were involved in resolving the illness as a united front, and had managed to develop a closeness no other nation-states on Terramatrix enjoyed. Sangria itself was working on a peaceful solution to its own disorganized districts, and began open talks of reconciliation with its various governors. In other important news, the ComStar HPG was officially operational, and allowed the unit an ease in arranging off-world contracts for its various units.

In late-December_, Sharkey reported finding an underwater complex of some sort during her investigation regarding the source of the algae captured at the storage facilities on _Content Not Found: isla-brasliera. She had encountered a Seahorse Cargo Submarine in the area, and trailed it to the location along the coast of the southern polar region near * The Independent Territory of Borealis, and was reporting what she had discovered. Led by * “The Werewolves”, the unit secured the facility, and placed a small garrison of infantry to ensure they could take anyone who returned to the site unawares. Named * Deep Ice One, the facility was a highly-automated Mech plant that built TLS-1B Talos, and the unit discovered it was yet another legacy of the Rim World’s Republic in this isolated region of space.

The border conflicts between the military of The Republic of Buntar and the independent warlord of Petrópolis had heated up; the Petrópolis forces had been deploying tactical nuclear weapons, that had both halted the Buntar military in their tracks, and concerned the other nations of the world. The Iron Dingoes were requested to deal with the matter by their allies in the nascent The Commonwealth of Nations, and in days, the unit engaged in a drop on the city, targeting its fortress, with the intent to seize any nuclear weapons discovered, and potentially seize the DropShip “Cadejo” for themselves.

The drop was hard, and the fortress defended by both Mechs and infantry in colors later identified as the Rim World’s Republican Guards, as well as some factory-fresh Talos… The fight was a success, and the unit’s infantry stormed the fort, searching for any remaining weapons, but found none. They did, however, recover the Sword of the Monarch from the museum, as well as free several medical squads and their dependents, offering them a home in * Landhold : Garrison. The Aviso was also captured, and interrogating its crew, the unit discovered the location of a hidden station in-system, known as * “Black Ice”; the storage site of numerous munitions, including the source of Petrópolis’ nukes. Using the Aviso as cover, the unit slipped aboard the station, and captured it and its skeleton crew, as well as recovering almost two-hundred HAVOK Tactical Nuclear Warheads. Spending a couple days to mothball the site, they abandoned it and returned home to report their recovery of the nukes, as well as their success in the mission, but made no mention of either Black Ice or the Sword of the Monarch.

The unit took some time to organize their interface groups, re-assigning various ships across the unit. They also began funding for * The “War Dogs” College of Military Sciences, and founded the basic concepts behind The Commonwealth Star Guards with their allies, promising equipment, vehicles and training if each nation-state in the alliance dedicated a landhold and personnel to the project. They also established plans for raiding their former enemy territories by using the Warlord’s own forces as cover for their actions. In late-January, the unit engaged with the developing government of The National Legionary Tragnar, hoping to establish ties with the nation, but quickly discovered that the “Vampires” in charge of the nation were worse than they expected, finding them even more aggressive and rapacious than they themselves were. By month’s end, various military industrial companies visited with the Iron Dingoes, attempting to sell their munitions, arms and equipment to the Dingoes and local national governments.

The unit then acted on information regarding the break-up of the northern San Isabel “Army of New Patagonia”, and dropped into the region to cut-off that renegade force and destroy it once and for all. A mixed force of infantry, armor and anti-tank guns, the unit put up some resistance, but quickly fell to the massed force of the Iron Dingoes line Mech and armor units. Returning back to their cantonments in Garrison, the unit began to plan for a much larger conquest; System – Gollere.

The House of Cards