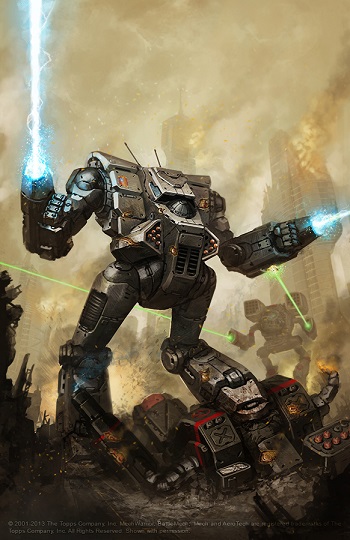 The Small War : Known today as the 1st Battle of San Andrés, the unit’s cadre force * “Sangrian (Air-Mobile/Mechanized) Training Cadre” came under attack at the airport of that territory. A substatnial force of infantry, armor and BattleMechs had made landfall, and were moving to assault the airport. Using their organic armor force of Ignis Infantry Support Tanks to great effect, they repelled the initial attack, and dug-in while an air war erupted over the island. The Iron Dingoes deployed all their forces at “The Factory” to seize air control, meeting fairly stiff resistance in conventional aircraft from the Menas Gervais aircraft carrier off the coast, all supported by six Corsairs, but the unit’s AeroFighters and Gunships managed to punch a hole large enough for the Iron Dingoes to land a force of recently recruited mixed infantry that had just undergone training. The local Training Company also managed to call-up many of the reserves they were training, and faced-down a massed assault of the Tragnar 4th Marine Battalion and their armor support.

This time, using the numerous MP-75mm Anti-Tank Guns captured from the first attack, and hastily prepared defenses in the tenements along the edge of the airport, the unit were well-prepared for the attack. The fight largely took place in the streets west of the airport, and using their remaining armor assets and captured anti-tank guns to great effect, stopped the assault cold, though not without losses. Eventually the remaining infantry from the 4th Marine Battalion withdrew, and the airport remained in Dingo hands. The unit salvaged as much as they could, and brought the wounded to the medical facilities in “The Factory”, and dug-in further.

On September 5th, 3024, the three governors of the The New Republic of Sangria met at * Landhold : Garrison for a war council. Many useful matters were concluded at this meeting that saw long-term ramifications in the nation’s rebuilding efforts, including the unification of their regional militias, the reformation of the national police force, and the employment of the Iron Dingoes as the primary training force of their military. It was also decided to engage the Dingoes in a punitive raid against Tragnar, targeting the heart of their long-range assault potential; the Tandanor Naval Yards. The national government offered an extension of their landholds, * Landhold : Izpek for the contract, which they accepted.

Meanwhile, in the Corazón Jungle, Moxie had been engaged in his Nexu studies, and uncovered a large series of oil fields extracting and refining crude oil. The El Gas corporation had been funding the local tribes to protect this secret, and exporting their products south into San Isabel, where they were also funding what was likely the mercenaries the unit had encountered and fought previously.

On September 16th the unit engaged in Operation : RECIPROCITY, conducting an orbital drop on the Tandanor naval yards. The unit quickly engaged with a handful of infantry and BattleMech forces, and sank the bulk of the ships right in their berths along the docks. They also discovered a large collection of military assets arranged for loading operations, and after salvaging some, destroyed the bulk before loading back on board the “Relentless” to return to their cantonment in Garrison. While these efforts were conducted, the Iron Dingoes engaged in a raid on a major CITEDEF military research facility in northern Tragnar, using * “The Werewolves”. The results of this took several weeks to conclude, but led to the recruitment of the survivors of a mercenary force being held prisoner at the facility, the “Darkstar Rangers”, and the recovery of their DropShip, the “Scotian Huntress”.

In response to the raids, the PR campaign began to spool up, depicting the Iron Dingoes as a “…pack of mangy curs…”, and “… lap-dogs of the Sangrian Tyranny…”. Hearing of Moxie’s find in the southern jungles, the unit council paid him a visit, and after learning of the mysitical ’Iron Hammers", took a helicopter trip, followed by several days of hiking into the jungles. They discovered the refinery and its extensive fields of oil extractors, and returning to Tuadann, gained the support of Warlord Varsha Arkadjian in any effort made to seize the illegal facilities. When they came back to Garrison to make preparations for the assault, they discovered that an alliance of several central nations, calling itself “The League of Free Nations”, had declared war on Sangria, calling it a “…leashed state in fear of its Oppressors…”, meaning the Iron Dingoes were behind all the problems of the The New Republic of Sangria.

As the war against the Dingoes and their allies in Sangria and San Isabel began to spool up full-scale, the Dingoes conducted their raid against the El Gas holdings, and its support village of * Landhold : Hellas. Largely depending on the militia forces of Tuadann, with several Iron Dingoes “military adviser” squads in support, they overwhelmed the facilities, and captured them with ease. Meanwhile, the leadership of the Iron Dingoes began conducting negotiations with San Isabel to engage in another raid for their government, this time regarding seizing an old claim they had on Islas Brasilera, and taking it away from their long-term enemy, San Marcos. Contract – Operation : “Mercury Rising”.