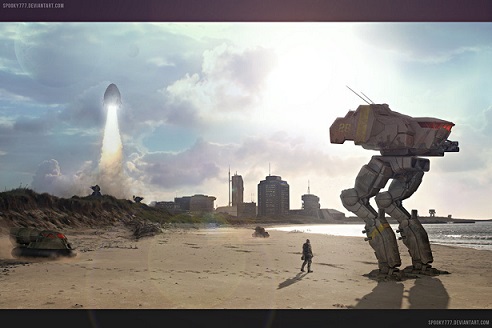 There’s No War Like Home : Returning to Terramatrix, the results of the unit’s assassination of the President of Sangria were still in motion. Several warlords had risen to take control over the various districts of the nation, and were in a casual state of raiding each other for resources, much like the Inner Sphere’s own Succession War in miniature. They learned of the Brightwater Base incident, and contacting Warlord Varsha Arkadjian, secured her long-term assistance and access across the border into San Isabel. Their few spies in * “The Dingoes’ Fangs” revealed the survivors from that raid had been joined by a large contingent of various mercenary groups near Lake Aurin. Paladin decided to head through the Corazón Jungle, and break directly against these forces in northern San Isabel, before they attacked the Iron Dingoes.

Blowing through the mercenary pickets on the border, the unit struck directly at the main force at Lake Aurin. The mercenaries put up a good fight, and were joined by forces from nearby stations, but eventually the Iron Dingoes overcame them and forced them to retreat. Many made their way to their DropShips hidden nearby, but the Dingoes intercepted them, and seizing the DropShips with their large infantry force, returned back to their holdings at Garrison. Diplomatically brushing the raid into northern San Isabel as having been in the best interests of the national government, the unit took stock of their salvaged ships and supplies, and planned for the future of their position on Dumassas.

The unit transferred their flag to the new “Relentless”, and conducted various other transfers and unit reorganization across the entire organization to accommodate its new fleet of DropShips. This also included installing the _"Gray Iron Workshop" on board the vessel and making it the focus of their * “The Dingo Pack” along with their Line BattleMech forces. The unit also spent money on various infrastructure projects and took the opportunity to modify some of their Mechs to standards they felt worked better.

At the tail-end of these changes they were contacted by “Betty”, and informed of the imminent arrival of Paladin’s new wife. Her arrival threw the unit into confusion, as Lady Jemmas of Horn proved an indomitable figure. Paladin agreed to the marriage terms, discovering it more a marriage of convenience, but the benefits granted them through the union was more than worth the personal discomfort he might otherwise experience. During preparations for the marriage, they heard about the odd competition over at * Sierra Madre Casino & Villa, in which anyone could “compete” for control of the complex.

The unit followed up on their own investigations into the truth about Blue Rock Candy Mountain, and sent a survey team to secure the site, finding it guarded by a variety of robotic AIs. Ending their guardianship, they recovered the data core stored therein, and managed to leave before it self-destructed, but they research data they found was invaluable and gave them an edge no one else in the Periphery had. The arrival of The Lighthouse later the next month gave them an opportunity to stock-up on some rare equipment, and the unit began secretly producing various LosTech items they had the knowledge of, applying them to their various machines and units over the next few months.

With the arrival of May, 3023, and the preparations for the upcoming marriage between Paladin and Lady Heather, many members of the unit began to examine their own futures, and searching for dates for the marriage became a serious issue. Everyone also quickly became local specialists in traditional Victorian marriage etiquette, not the least of which was the groom himself. The day before the marriage, he was personally challenged by a potential rival, Count Almaviva, the mysterious heir to The Duchy of Lovelace. The resulting duel, between Paladin and a proxy mercenary piloting a King Crab, led to Paladin’s success (barely), and the marriage continued. The pair were privately married in * Landhold : Miguel amid great pomp and ceremony by the unit, and love indeed proved to be in the air.

With the unit’s leader on his honeymoon, Templar and Pitbull decided to visit the * Sierra Madre Casino & Villa and participate in the “Competition”. The pair spent several days at the site, discovering a great rivalry between various wealthy patrons all vying for control of the complex. In their exploration, they found the site sat atop a vast complex of secret workshops, that it was an intrictae trap designed to kill the competitors (and each other), and that the secret to winning was not in fighting and killing your opponents, as everyone seemed to think, but rather to show simple gratitude and ASK the complex for control. They did so, recovering the deed to Sierra Madre, and triggering the “Gala Event”, fled the complex before it was destroyed. They also discovered that the personnel of the facility had been given an opportunity to escape by the facilities owner, and they disappeared into the night, never to be seen again.

The unit settled into a rebuilding period, establishing the facilities to “The Factory” and * Landhold : Miguel that would become the heart of The Fuel Rats, and swapping-out their supporting combined-arms battalions with the “Relentless” while the Line took some more downtime. The return of Ravenheart to the unit brought word of whatever Baron Kenton Sarne was up to in the Systems Constellation – “The Taurian Outback”. The unit also built and established * The Blood Raiders from among various commands in their control, intending it to operate as a small independent company capable of exclusively loyal operations such as salvaging LosTech sites, or conducting quiet surveys of possible salvage sites.